I’ve made light of it before as it’s a handy thing for “non forex traders” to also consider keeping in mind.

The currency pair AUD/JPY has long ago been directly associated with the “risk on” trade, as traders simply borrow ( sell ) Yen ( as the base lending rate in Japan is practically 0% ), then invest (buy) the same money in a higher yielding currency such as AUD ( base interest rate currently paying 2.5% )

It’s essentially free money, and rests pretty much as “the backbone” for most major banks – as far as  forex strategy is concerned.

When this trade “unwinds” ( when risk appetite wanes, and banks and major investors begin to seek “safety” ) you certainly don’t want to be on the other side of it – as the move is nothing short of amazing.

Lets take a look at the “unwind” back in 2008, and consider where we’re at with the pair today. 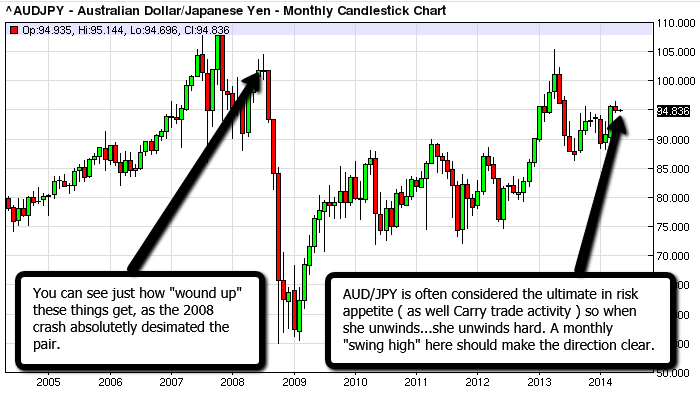 The pair “peaked” right along side “peak activity” surrounding the Bank of Japans massive QE program and equally massive dilution of the Yen, sometime “around this time” a full year ago.

We can see that it’s done very little since, as “risk” apparently rages on ( as seen via U.S Equity prices ) in the West.

A “swing high” here marking a “lower high” on a monthly chart would prove to be a very, very powerful technical sign that the turn is indeed near, as big banks and institutions will have used these past few months to quietly whittle away, adding to positions here, selling a bit there, getting themselves into position slowly as to not turn price against them with any large-scale moves.

Until of course the large-scale moves commence ( as seen via the “red candle waterfall” of 2008 ) where the big boys have already gotten out  and retail investors “unknowing” get caught holding the bag.

One has to consider that “if the Big Banks are running the show” ( as we all know they are ) – don’t you think they’ve got the info / knowledge / plans in place long before we ever hear of them?

Do you think the biggest players on the planet get “caught” suddenly realizing that things are turning? Or perhaps because they missed a bit on CNBC? There is absolutely 0% chance of this as it’s this is  “their market” and the house always wins.

Equities in the West continue to grind as the turn has already been realized in Japan. These past 4 or 5 days are again what we call “distribution days” as big players unload to those late to the party, in preparation for the next “real money to be made” on the short side of town. Currency wise a large and solid “short AUD position” has been building for quite some time, as other “risk off trades” slowly fall into place day-to-day.

Very relaxed here as positioning is well underway and the tiny squiggles don’t really mean much at this point.

I can’t see how unemployment data out of the U.S ( 344,000 more last week ) could be helping anyone with their medium and longer term trade ideas, but I’d love to hear the arguement.

Good luck everyone, and have a good weekend.