If you’ve never heard the term “dead cat bounce” – here it is. A dead cat bounce is an industry term used to describe the upward movement of a given asset “contrary” to a larger degree down trend.

Dead Cat Bounce – In finance, a dead cat bounce is a small, brief recovery in the price of a declining stock.Derived from the idea that “even a dead cat will bounce if it falls from a great height”, the phrase, which originated on Wall Street, is also popularly applied to any case where a subject experiences a brief resurgence during or following a severe decline. (thanks Wikipedia)

In this case – I guess it’s not exactly a dead cat bounce, as the dollar has only just recently begun it’s expected downward fall – but I do expect a “bounce” all the same. As far as trading it goes – if you are an equities buyer – I imagine you should get some nice opportunities to buy in coming days, before this thing lifts off to new highs.

As a currency trader – I am not going to bother doing anything short of watching the dollar closely – and aim to catch it at its peak (perhaps around 81 late in the week) before re-entering “short dollar” positions across the board. It’s not worth trying to squeeze every single penny, and push any further short dollar positions now ( considering I am 100% in cash).

Best trade is no trade at all here – and as I’ve said many times before – I am not missing anything – there are a million trades – and chasing anything is a fools game. 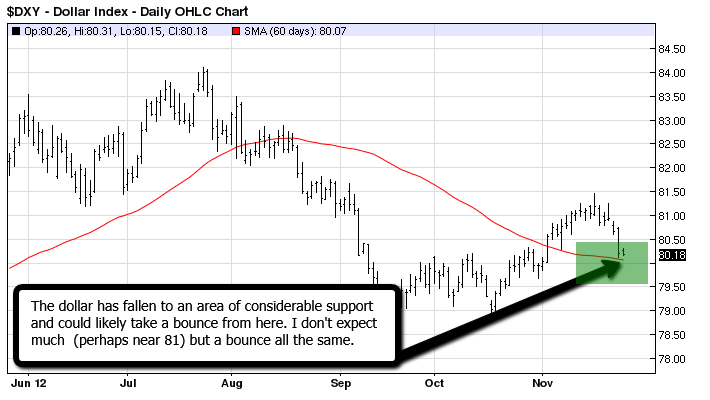