Professional traders don’t care if they get stopped out, because their money management rules allow for it. Trades are trades…nothing more. The key is to have more winners than losers at the end of a given month / year.

Amateur traders freak out when a trade moves “even the slightest bit” against them because 9 times out of 10 they’ve traded far to large ( or on margin ) and very quickly realize –  if a single trade goes against them…..they’ve blown up their account and are left with nothing.

Professional traders plan the trade “first”, while amateurs chase news events and headlines, more often than not finding themselves on the wrong side of the trade – cuz they are chasing and idea…and are likely far to late.

Pros look at the “macro “ while amateurs still believe they can `day trade it`with  nothing but a stock chart in front of their faces. 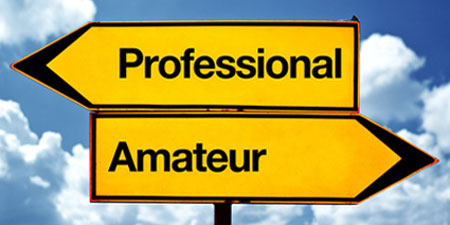 Professional traders inevitably find themselves trading far less often ( picking their shots more effectively ) while amateurs tend to over trade…exposing themselves to far greater risk ( in volume of trades alone ) and in the end….far greater losses.

Pros have no emotional attachments to a trade. Amateurs are fully invested “emotionally“ which clouds good judgement, and again leads to over trading and panic.

The list goes on but in a general sense, the largest difference between the two ( go figure eh? ) is really no secret.

So…..if you want to log hours and hours / months and months / years and years of successful trading….what’s the biggest tip I could offer?

Volatility obviously on the rise here these past days……..short USD trades and long Gold / Silver miners good. Just flat as a pancake these last few days. Slug it out….or freak out. You a pro or an amateur?