Speculation as to “where markets are going next” is running rampid across the various forex, stock trading, news outlets and financial blogs these days, with a pretty equal split between both the bulls and the bears.

And for good reason as….It’s an absolute meat grinder out there.

This being said “caution” is likely the best suggestion anyone can make while markets continue to “sit on the fence” but you know…..you’ve really got to “go with something” as lack of conviction won’t really do much for you either.

Reducing position size or going to a cash position is never the wrong thing to do, so there’s always that….but again – we’re looking to “make some money here” so if it’s a bit of “hard work that’s required” well then?….We’re gonna do it!

I’m going to simplify and keep this short.

The largest QE program on the planet ( coming out of Japan )  is currently doing “nothing” to elevate Japanese stocks as the Nikkei “will” continue to fall here. This is significant in that…if the QE money isn’t doing it anymore ( as well consider the QE money in the U.S now evaporating monthly ) what on Earth would it take to continue pushing higher? 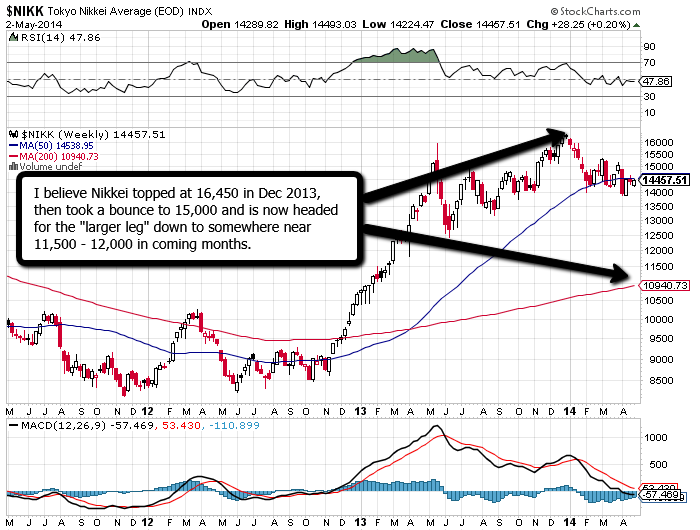 Who’s printing the most money? Where’s that money going?

Do you seriously think the “world at large” is rushing to the “supposed safety” of U.S Bonds for anything more than a short-term trade?

These things take time yes. It’s a grind yes, but there are many excellent trades setting up for those who are patient, and for those willing to do a little work.

I remain short the Australian Dollar ( risk currency ) as well am keeping a very watchful eye on all JPY pairs as these “will” move fast and hard with further weakness coming in Japanese stocks.

I continue to look for a stronger US Dollar on the “repatriation trade” and see us at a significant turning point here. Should USD fall lower it will only mean the trade has been “put off” a touch longer as much further weakness in USD will have some larger “ripple effects” with our friends across the pond.

I don’t believe the U.S can allow USD ( if they can really help it remains to be seen ) to fall much further without risking a serious, serious knock to whatever credibility it still has left.

Lots of great stuff on tap this week, so good luck everyone!