This is getting really interesting.

Getting this right could provide some of the absolute best trade opportunities of 2013. I plan to take full advantage. Considering that I expect the coming year to be extremely difficult to trade (and a real minefield for those with little experience) focusing on “what works” will be essential for survival.

As I’d mentioned in a previous article, the dynamics surrounding the U.S Fed’s plans to “print their way out of debt” and the dynamics of Japan’s recent foray into the “monetary easing business” are very different – and well worth pointing out.

Bottomline – Japan’s public debt is predominantly domestically owned (95% is owned by Japan’s own citizens) while the U.S owes more than 50% of its debt to foreigners. Japan’s printing will have little ramifications (globally speaking) and essentially they can print forever – managing  this domestically, with almost no risk of default.

Sooner or later holders of  U.S debt are going to get extremely “choked” as the dollar denominated paper they own is driven into the ground…and worth less and less and less…….

A quick look at a long term weekly chart of the AUD/JPY. 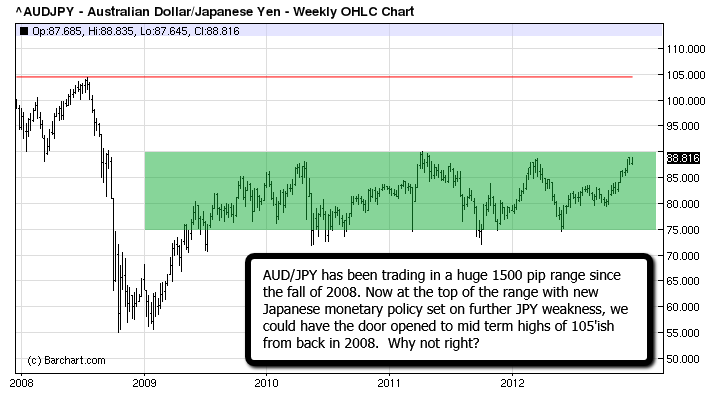 The recent monetary policy shifts/ implications out of Japan are a game changer if you ask me – and will likely be cornerstone to my trading plans moving forward. Eventually (as well with consideration of “eventual” rising interest rates in America) the U.S game will come to an end. It’s gonna be messy, and it’s gonna be tricky to trade.

The Yen (at least for now) appears to have a much clearer path on its road to “devaluation” than the USD – as the currency wars are now really starting to heat up. Opportunity will be found shorting both, but the fundamentals suggest that the Yen may provide an easier path to profit.