In recent years, central banks of developed markets have used quantitative easing (QE) in an attempt to stimulate their economies, increase bank lending, and encourage spending.

To date, however, the greater availability of credit in developed markets has not been offset by demand – resulting in an abundance of excess liquidity. Much of this surplus capital has flowed into emerging markets, which has had adverse effects on their currency exchange rates, inflation levels, export competitiveness, and more.

As historical low rates gave investors cheap money and forced them to find higher rates overseas (and with the continued mess in Europe) – emerging markets were the natural place to go.

In general, financial firms that are now free to lend rush their investments into the emerging economies. This is because there is a higher rate of return on investments in emerging countries compared to highly developed countries like the United States. So, instead of a U.S. financial firm pouring money into U.S. investments, the firm piles  into India ( or Mexico ) since the investment will make more of an impact and give them a greater return.

The symbol “EEM” can be used as a broad look at emerging markets. 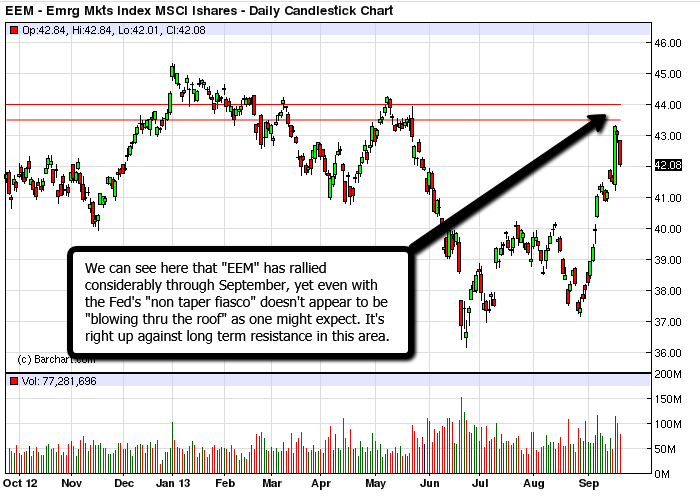 The effect of Fed tapering could prove disastrous for emerging markets as the flood of easy money dries up – and dollars are brought back home.

Putting this in perspective I hope gives you a better understanding of how much “rides” on the current global “injection of stimulus” as all these things are so interconnected.

I would have expected EEM to “blast for the moon” on the Feds’ shocker, but apparently not. This in itself is also suggestive of the fact that the “big boys” might just be pulling back a bit here – which would also equate to USD strength.

I like what I’m seeing as this trade appears to be taking shape, although I’m ready at a moments notice to dump and run. USD has swung low as equities have “swung high” so…..another head fake / whipsaw? Just as likely with the current conditions so……trade safe and be ready for anything.