Considering the number of days we’ve sat “patiently waiting” for markets to make a reasonable move in either direction, as well the amount of time that’s passed since “I’ve made a decent move” I thought it might be of interest to give you a visual representation of what “sideways” looks like to me.

I’ve chosen a chart of GBP/JPY ( Great British Pound vs The Japanese Yen ) as the example.

If you’ve been brushing up on your Japanese Candle Sticks ( which I certainly hope you have ) I’m sure you already know our friend “The Doji”.

Doji – Doji are important candlesticks that provide information on their own and as components of in a number of important patterns. Doji form when a security’s open and close are virtually equal. The length of the upper and lower shadows can vary and the resulting candlestick looks like a cross, inverted cross or plus sign. 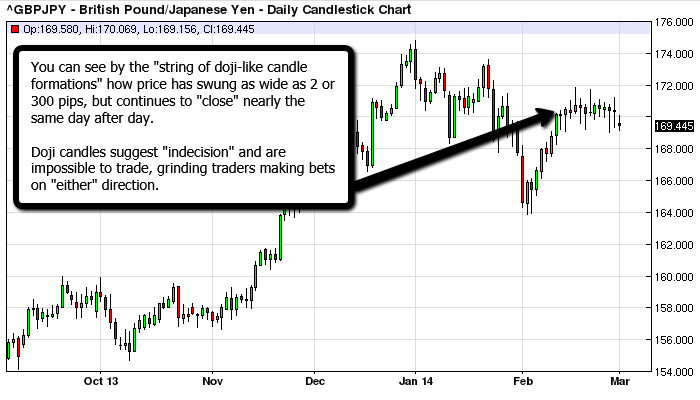 You can’t trade this. It’s impossible and not even worth considering as…..there “is” no clear sense of direction. Each day has the capacity to wipe out traders on “both sides” with wild swings up and down, only to have price settle back to where it began.

What it also suggests is that markets are clearly at a point of “indecision” as neither bulls or bears are able to run to far with the ball.

Hopefully this may put the “entire month of February” in perspective for you as I’ve been “considerably less active” than usual.

Knowing what you know now……can you blame me?

I know when to put on the brakes, and when to step on the gas……