I can’t stand The U.S Dollar.

You know that…..everyone knows that. The actions of The U.S Federal Reserve with it’s complete and total disrespect for the currency and continued abuse of it’s position as the “world’s reserve currency” is enough to make anyone sick.

So when would we start looking for USD to move higher? Why would we even “consider there a chance” for this beaten down piece of junk to go anywhere but down the toilet?

What many fail to understand is that “the value of a given” currency can only be deemed in “comparison” to another currency…or another asset. The pieces of paper themselves carry no intrinsic value what so ever.

Consideration of “dollar strength or weakness” as compared to a single thing ( like The Euro for example ) is ridiculous as….it is exactly that – a “comparison” of only two given currencies.

How’s the U.S Dollar stacking up against The Canadian Dollar?

Looks like a fantastic buy opportuntiy as USD has merely “pulled back” vs Cad.

USD vs CHF looks like a pretty classic reversal over the past few months, making a higher high, breaking the series of lower lows and lower highs. A swing low “somewhere in here” would mark a fantastic entry point long.

What about Crude Oil?

Pretty straight forward. When the price of something “goes down” in can equally be argued that the “value of the money” you are using to purchase such products has “gone up”.

What many just can’t wrap their heads around ( one dumb fellow in particular ) is that “there is no blanket statement” in considering being “long or short” USD as it only depends “against what”? 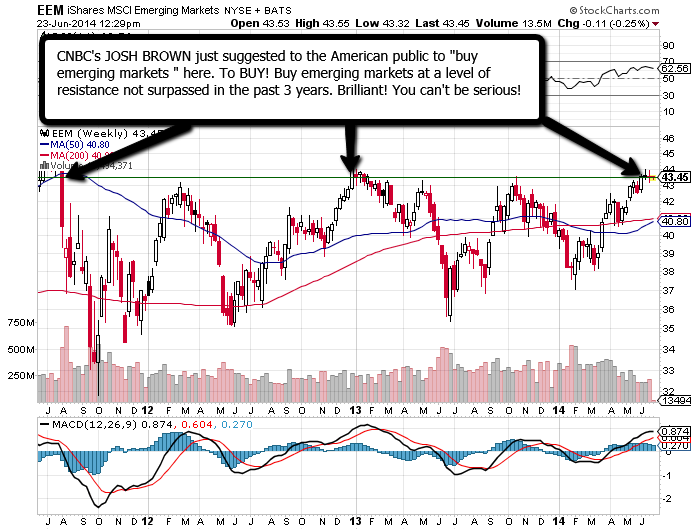 A good indication of a stonger dollar can be seen when Emerging Markets start to fall.

Imagine all that “free paper money” printed by The Fed and in turn “invested abroad” as to actually get some return ( you don’t actually think the banks invest the money they get from The Fed in “America” do you? – Please.) piling back into U.S bank accounts / converted back to U.S with concern for a possible rise in interest rates.

An absolute “sunami” of USD floods out of Emerging Markets and back into the United States, on even the smallest “hint” that interest rates may rise.

But……Interest rates ARE rising! In fact….( how soon you forget ) that interest rates on the 10 year U.S Treasury have DOUBLED in the past year and a half!

Rising interest rates cramp corporate borrowing and in turn kill bottom lines. A rise in rates pushes USD up, as well equities down.

Rates have already reversed, adding more fuel to the fire if considering a stronger dollar.

The short term squiggles are more or less meaningless at this point as…..The Fed and Central Banks abroad are just doing what they can to grind this thing a little longer before shit hit’s the fan.