So the SP 500 ( and global appetite for risk in general ) has got a couple more points left, before she turns and makes the next “larger leg” lower, then even lower still. I hope you’re prepared for a couple of ugly months.

Here is what we are looking at for The SP 500 and “global appetite for risk” over the coming months: 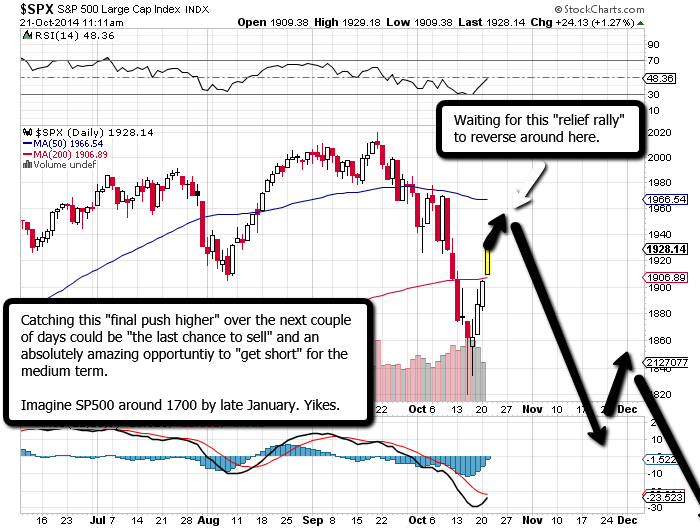 I know you don’t want to hear it but…….unfortunately after the countless number of posts, the never-ending supply of supporting data, and finally the “exit of The Fed” – you’ve had ample warning. This market has no possible chance of holding up on its own, and its VERY LIKELY that come late January The Fed will make reference to “QE 5” or which ever “QE” we’re on to next.

Survival here is key, as there will be significant buying opportunities come February – pending that you’re not so deep underwater with current positions that perhaps you’ve got a little cash to deploy AT THE LOWS.

Let’s imagine that markets “scream back” after this correction leading into late January, and by April of next year you’re “almost break even”.

Lots of pain to endure in the meantime, let alone profits to be booked ( if you currently have any ).

This thing was built on pillars of sand – you knew that.

Now the waves are coming in.