The typical correlation between the value of a given markets equities, and the value of its local currency is pretty well illustrated here. The Nikkei has come along way – and as I expect JPY to take a bounce, one can only assume it’s likely time for a correction in Japanese stocks as well.

The chart below is weekly – and the horizontal line of support and resistance should be drawn with a “crayola crayon” not a laser pointer. When viewing a weekly chart one has to keep in mind that a “turn” doesn’t happen overnight. Imagine even one or two more candles tucked up there around these price levels  – and you’re already looking out to mid April. 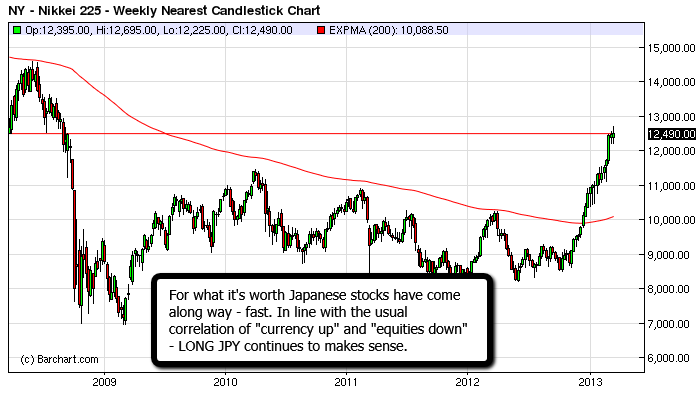 At times  – some of my trades take weeks to develop, and then even longer to pay off ( all be it… pay off well ). For those seeking “instant gratification” when trading foreign exchange – perhaps you’ll need to look elsewhere.

Finding the opportunities is one thing – being able to effectively trade them is another.

It’s been a real grind sideways in the majority of the JPY pairs over the past couple weeks, and the trade has tested me on several occasions. With volatility at extremes and a lack of clarity in market direction – JPY certainly hasn’t “taken off for the moon” on this expected move higher. As outlined in the chart above – the probability of a substancial move remains.