Sideways is not a direction I am particularly fond of. You can’t make money, and for those unable to distinguish the characteristics of “sideways” – you can also lose money – very fast.

Traders dream of mounting profits  – with day after day followed by yet another tall green candle, with  trend so clearly in place that a five-year old could trade it effectively. This is rarely the case. Where as – we are most often faced with  ambiguity, trendless markets, ranging stocks or currency pairs and a general sense of confusion as to “where the market is going next”. In fact, they say that markets are generally only trending 30% of the time – and that the remainder of time is spent grinding traders accounts to dust in the dreaded direction of….you guessed it – “sideways”.

Lets look at a quick example. 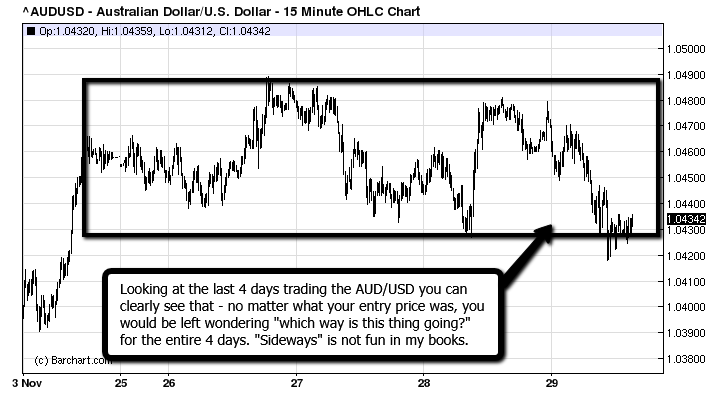 In the example above – clearly no trend is in place – and a trader is left struggling for days, looking for a definitive sense of direction. This (more often than not) pushes a trader to do things such as:

For the inexperienced “sideways” is almost certain to cause significant emotional pain, and even more so –  pain to their account balance. I do my absolute best to avoid this at all costs but still – with years of experience, have learned to accept it as a part of trading, and that is virtually impossible to avoid 100%.

Patience is the key – as making decisions during times of “sideways” will almost certainly take its toll on both your account….and your emotions.