Something important came up in the comments area last night, and I thought it worth pointing out.

When we consider the impact of a “flight to safety” ie…….a move in markets where “true fear” pushes investors to dump risky assets ( and to literally….seek safety ) it’s impossible not to consider the U.S Dollar as being “top of the list” as the place to run and hide.

Now, this may seem “counter – intuitive” considering the recent ( and ongoing ) blunders within the Unites States but – that’s not even the point. Take a look at the chart below and note the total % of global currency trading for the top 10 most widely traded currencies in 2013. 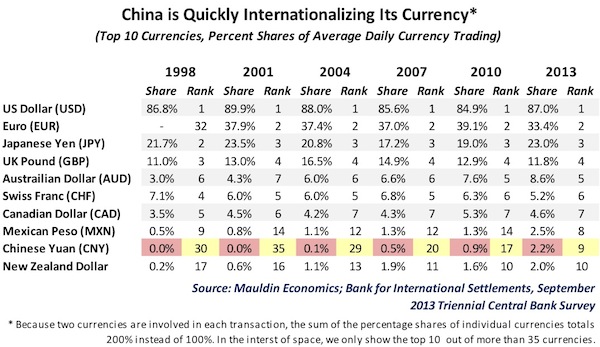 As a simple matter of “default” when risk comes off and investors get scared – there is absolutely no question that USD will take massive in flows, as risk is unwound and risky assets and investments in emerging markets are converted “back” to USD.

Now, we’ve still not seen a “true flight to safety” as global markets have so embraced the never-ending flow of “free money” coming out of both the U.S as well Japan – with the general investment climate being one of accommodation. This can’t last forever.

You’ll recall I had envisioned a time where “all things U.S would be sold” and to a certain degree I see that this has already happened. Starting with bonds ( as suggested ) then the currency, and lastly ( alllllways lastly ) stocks now starting to show their “true value”.

I’m not concerned with much further “downside” in USD at this point, as one has to keep a couple other “macro” things in mind.

How long do you think the Chinese and Japanese holders of American debt are looking to stand around and watch their U.S denominated assets decrease in value? How far do you “really” think that Ben and the printing presses can push before somebody “really” pushes back?

Food for thought no?