The hot money out of Japan has been responsible for “a pile” of the recent run up in U.S equities, as Ben and his buddies have been busy enough in the bond market – with little success. TLT is currently priced at 102.65!

I’m pulling up this ol chart from back “I don’t know when” I first suggested what was to come for U.S bonds, the U.S dollar – and inevitably U.S stocks.

Quote: “Not much else to add here as the intermarket analysis above pretty much outlines the direction for the U.S Dollar. I feel we will likely see a time very soon, when U.S bonds, U.S stocks as well as the U.S Dollar all fall together.” 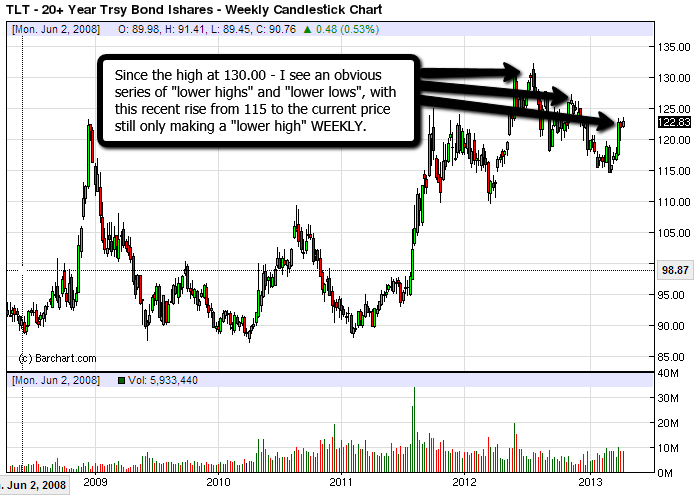 I really don’t think people grasp how screwed the Fed is, and unfortunately how this translates to the “middle class” of America – who will be stuck paying for it.

With 85 billion per month in effort, you can see by only a couple of “down days in the market” the Fed is absolutely powerless when the “market decides” what’s what.

You’d seriously have to ask your self what on Earth would need to occur to “reinstill confidence” in the purchase of U.S bonds/debt? Not to mention the “global move” away from USD. Tapering is impossible. QE will be doubled no question, then likely tripled.

Did I mention that recent data has just had the “Yuan” replace the Euro as the second most widely traded currency on the planet?

This may not be the “last of it” as the large majority of retail investors will view this “next dip” as an excellent place to buy….and they will be right – for a couple weeks.

You want to play the correction?