There is continued talk in Forex circles this week that the European Central Bank will send a “dovish” message at this weeks policy meeting – suggesting that further monetary easing is likely on its way. The recent strengths in EUR hurts exports, and some feel a rate cut could come as early as this meeting scheduled for Thursday.

As we’ve discussed here on my occasions, the current “currency war” has countries racing for the bottom, with hopes of making their export prices look more attractive to foreign buyers. If your buyer can stretch his money further and possibly get a better deal buying from you ( as your currency value is reduced ) – you sell more airplanes, you’re country’s economy grows etc…

At least that’s the idea anyway.

Lining this up with some crazy technical conditions I present to you the chart of EUR/JPY – or the Euro vs Yen. On purpose I’ve added every single technical indicator / explanation as to further drive the point home, as this “should” be a whopper. The chart is a day or two old and has already moved a couple hundred pips lower. 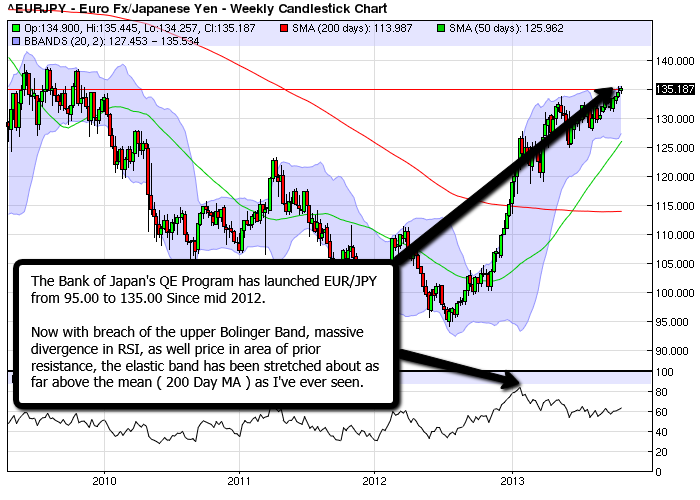 It was the BOJ’s massive liquidity that drove this pairs huge move over the past year, and now we’ll see The European Central Bank “fight back” with more talk and a possible rate cut to tip the scales back in their favor.

On nearly every technical level known to man ( and now with increasingly likely fundamental factors ) this thing is about as overbought as it gets, as this again is a “weekly chart”.

Continued USD strength coupled with a move by the ECB could have this thing fall hard – making for a fantastic short opportunity moving into Thursday’s meeting.