It’s difficult for many to see what’s “going on globally” when all you’ve got day to day is “canned news” via the mainstream media. A casual glance at the T.V and it’s pretty easy to just assume “everything is up” – everything is moving along just fine.

The Global Dow – The Global Dow tracks leading companies from around the world in all industries. It covers both developed and emerging markets. In addition, it includes companies from emerging sectors, such as alternative energy. The components are equally weighted, which means that price movements of the larger stocks have no greater impact on index performance than those of the smaller stocks.

(GDOW) is a 150-stock index of corporations from around the world, created by Dow Jones & Company. Only blue-chip stocks are included in the index.

Lets take a look at the chart: 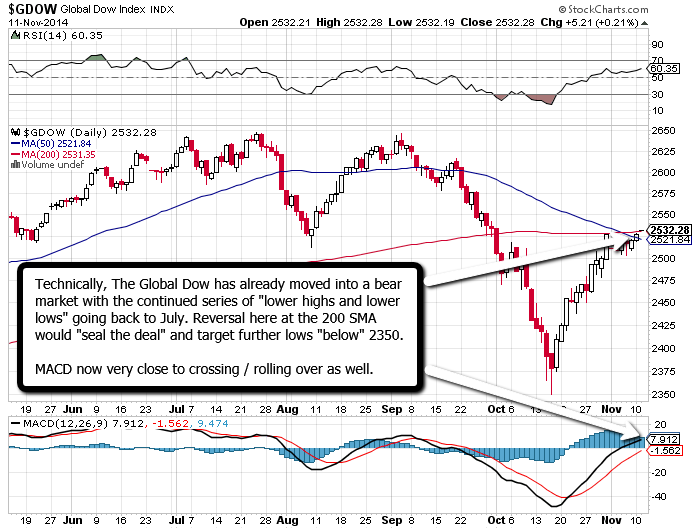 The Nikkei looks like a double top here around 17,125 after the massive “blast higher” brought on by The BOJ’s surprise announcement of even further “further” QE, now causing considerable political concerns in Japan.

I’ve considered this as a “last ditch effort” as opposed to a meaninful contributor to further fuel global appetite for risk, as we have all now clearly come to understand – QE does absolutely nothing to better an economy. It hasn’t worked in Japan – and it won’t work for The U.S either.

The current pattern playing out in U.S Equities ( commonly known as a “Megaphone”) has now reached its upper levels of resistance, and will likely be turned back here as of today, and if there is still “some semblance of reality in markets as we know them” – The U.S Dollar should now follow suit.