I’m pretty sure by now – everyone has fallen under the “Bernanke spell” and is more or less convinced that stocks will go up forever. As a currency trader this is really of no consequence to me “directly” although I’ve always maintained a measure of “risk” via the SP500  – in my week to week analysis. Looking at the index unto itself it would be hard to argue that “risk is off” as U.S equity prices “appear” to just keep going up and up and up.

Although If you removed the banks ( and their reported profits in the 2nd quarter – thanks to the “Bernank”) you’d be left with an entirely different picture. Heavy weights like Apple, IBM and CAT all down, down ,and down some more.

The SP500 is now about as far stretched above its mean price ( the 200 Moving Average ) as it’s ever been in the history of the index and has taken on the characteristics of  a large, thin membrane , floating translucent object. You’ve got it – a bubble. 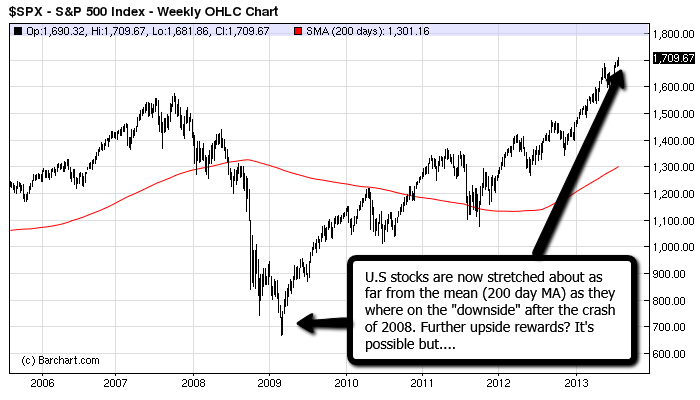 Gold on the other hand is also stretched about as far from the mean as it’s been in a very long time, and has recently shown evidence of bottoming. As we’ve discussed earlier –  since the massive liquidity injections / stimulus provided by both The Fed as well The Bank of Japan there really hasn’t been a “need” to own gold, as investors have had little need to seek safety. 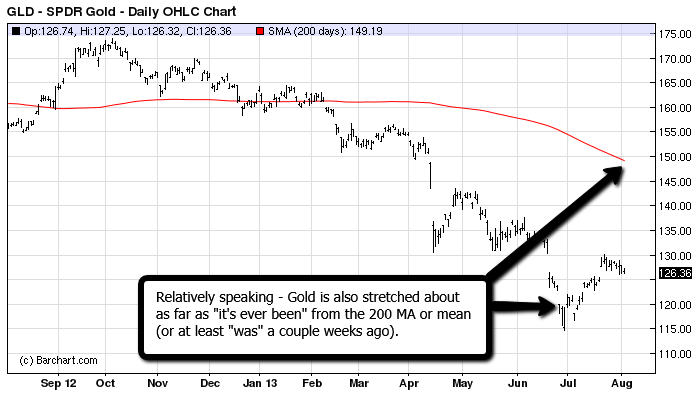 TIming trades on these longer time frames is difficult for the newcomer, as well not exactly what one considers “exciting trade action” but it’s important to get a lay of the land before stepping out on the field. With “all things” as stretched as they are – the elastic band will always ALWAYS snap back. It’s important to weigh the odds of “risk vs reward” – and even more important when things are pushed to these extremes.

Could the U.S stock market continue to climb forever? as Canada’s market still can’t break higher? As Japan has just put in a “lower high”? As EU Zone continues to struggle? As the U.S dollar continues to grind lower?

I suppose anything is possible, but generally speaking – non of this exists in vacuum. I assume that Gold and the precious metals in general “should” take a large part of the “safety trade” when we do finally see the turn.

Will it be next week?