So it all comes down to Trump’s speech tonight….as market participant stand like fat deer in the headlights..

Gold still the same. EUR/USD up nicely but still more or less the same, and the beast of all beasts NUGT takes the world for a diving lesson. Boom…talk about a stop run. These things don’t happen unless the big boys are making their moves. They can push price a couple bucks in a couple of hours without batting an eye….all the while your piddly 200 shares with a .50 cent stop get’s gobbled up. Multiply that by a couple 100,000 ( or million ) and you start to better understand just how difficult it is to “trade” with a “pea shooter”…when those on the other side of your trade carry billion dollar bazookas. 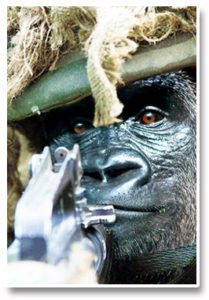 You really don’t have much of a chance.

I find it incredibly ironic that the Trumpster is calling for some 54 billion more spending on Defence, and 1 Trillion on infrastructure when the country is already 100% flat busted / broke / bankrupt. As suggested by a few of the brightest minds in the comment section here at Kong –  sounds like the ol debt ceiling with just get raised, then raised again…then again. Where does the money come from?

Sounds like more money printing to me..but I thought the economy is expanding and there is now talk of the rate hike cycle beginning? Not.

QE will happen in ‘Merica again.