Ugly in Japan right now ( Nikkei now down -323 ) ….so you can likely look for a pretty tough open there in ‘Merica tomorrow morning. Yes that’s right…..Japan’s stock market opens while most of you are still “drinkin buds ‘n throwin horseshoes” out back yer mamma’s trailer. Sunday night baby!

Sunday night is when “we” start putting in the work.

The U.S Dollar continues to get absolutely demolished on the back of Trump’s “healthcare beat down”. You get it right? Markets are recognizing very quickly that poor Mr. Trump isn’t gonna get jack shit done in Washington ( as this was his first real attempt ) and that future tax cuts / infrastructure spending and all the other horse shit promised ( no fault to the Donald on that though…. ) will inevitably fail. Not gonna happen. Impossible. So…….

QE5 is coming to America. Sooner than you think, and it doesn’t have a single thing to do with “who” sits at the helm.

The U.S Dollar is incredibly late putting in a “daily cycle low” and will likely do so very soon. Not to say we don’t get further “waterfall action” first but….I’m actually more interested in “the next leg down”. 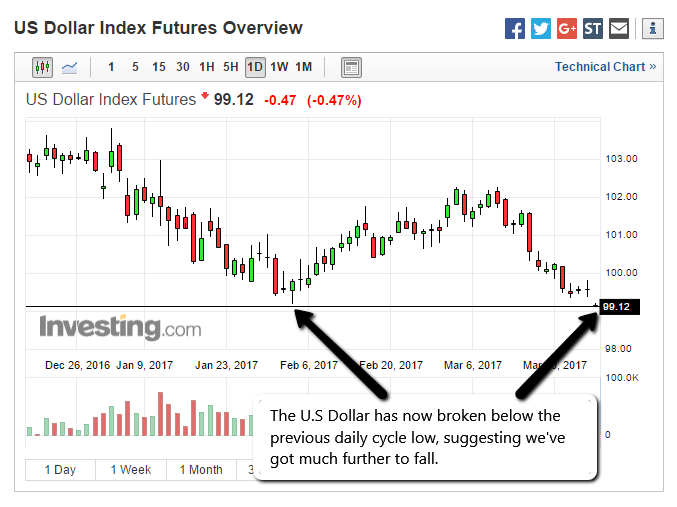 Now that we have what we called a “failed daily cycle” we can count on the next one doing the same ( as suggested months ago ) so……you wait for a daily swing low – then max 6-8 days bounce ( in this case likely less ) for re – entry on the next full daily cycle expecting it to go EVEN LOWER.

This will coincide with all the same currency correlations I’ve hammered you with for years now, so keep your eye on JPY as well EUR and AUD for some “massive trades” coming soon.