Straight up…..anyone suggesting that you “buy” is likely a banker, a broker or some dumb ass blogger with a single strategy ( or total lack of strategy ) appealing to you on the only level they can.

The notion that “bears are negative” and bulls are “positive” is completely and totally ridiculous as this is a “market” that trades in both directions. If you can’t develop strategies for the “red candles” how on earth do you possibly think you can be successful? Just buy and hold? Just “buy” cuz you are “optimistic about the future”? Dumb.

I’m as optimistic as it gets. Building my spaceship, saving my pennies for the liver transplant I expect to get somewhere down the road..plotting my investments in Graphene and spending my spare time plugging away at the latest developments in physics. The future looks amazing! But what the f#@k does that have to do with making money in the markets?

Since the vast majority of you don’t even trade Forex, it’s very likely that you lack proper context. If you dig back into the blog, you’ll find countless references to the fact that “currency markets lead all other markets”. Pretty straight forward considering that you need “money” to buy stocks so…….there it is. If you’re watching the money – you will always be one step ahead.

So what’s the deal with my USD Short Trade?

The deal is – it’s been 8 straight days since entry, and the trade has been amazing.

The US Dollar has absolutely cratered against it’s “printing partner/funding currency” the Japanese Yen. Didn’t hear too much about it in the news? Not surprising.

USD/JPY has fallen 1700 pips ( yes that’s right – 1700 pips! ) since markets topped out some months ago., and is quickly approaching “intervention territory” as far as The Bank of Japan goes. The huge move in Japanese Yen – a Tsunami for the Japanese economy. 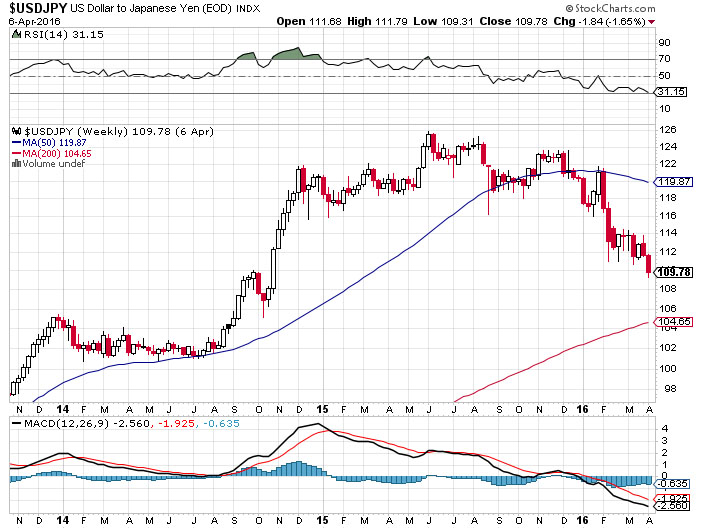 I’m banking profits, as well letting a couple of these trades run with a tight stop as the money has already been made on this recent “leg lower in USD” but don’t be mistaken.

There will be another one coming. Bank on it.