The Wilshire 5000 Total Market Index, or more simply the Wilshire 5000, is a market-capitalization-weighted index of the market value of all stocks actively traded in the United States.

As of October 31, 2012 the index contained 3,692 components. The index is intended to measure the performance of most publicly traded companies headquartered in the United States, with readily available price data.

I keep the Wilshire on my radar, as a better means to “truly track” the performance / direction of U.S stocks, in that the index includes nearly ALL PUBLICLY TRADED COMPANIES.

I’ve borrowed the chart below ( and will certainly give credit where credit is due, should anyone object) to illustrate just how “extended” U.S equities are right now, and to further the case for inevitable correction.

This is a “monthly chart” so the implications / divergence in volume and price ( look at the volume bars below ) is of particular note as this “never-ending rally” has continued for months and months, on less and less volume. 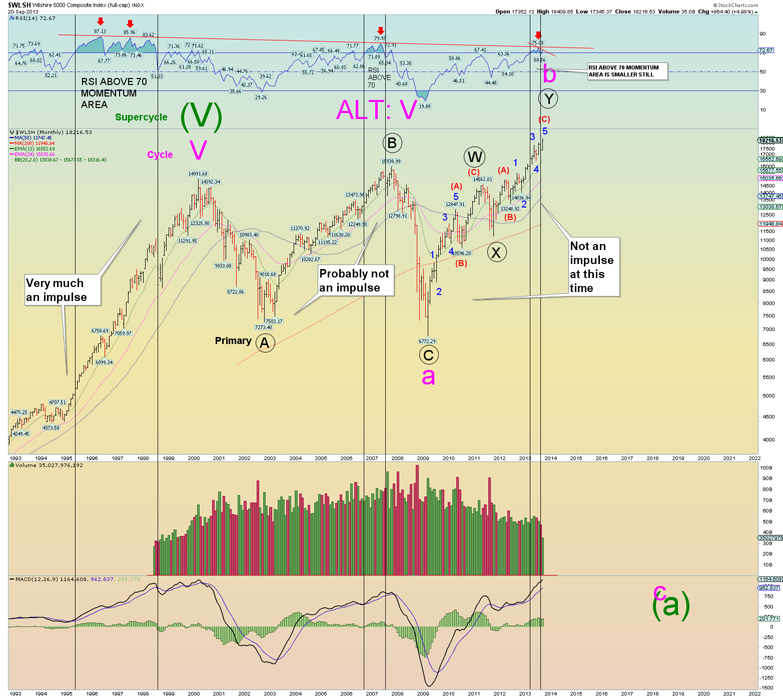 As well the angle of the “RSI” up top ( gradually lower, then lower over time ). The distance price has stretched above the 200 Day Moving Average ( red line on chart ) as well the MACD (below) literally “off in space”.

A close friend of mine and another mutual friend are considering buying Facebook stock this Wednesday, with plans on seeing it hit 100. As market particpants primarily act on emotion – this in itself may lend further creedance to the fact we are indeed – “near the top”.