As China’s largest trading partner and the world’s second largest producer of gold – I often look to the Australian Dollar (AUD) movement, as an excellent indication of  “risk behavior” in general. As well (and more broadly speaking) many consider the “aussie” and excellent proxy for gold.

I don’t see the two assets correlation in an absolute “minute to minute” or even “day-to-day” way (as each comes with its own volatility and characteristics) but when looking at the bigger picture – similarities cannot be denied.

A 5 year weekly chart of AUD/USD – an almost mirror image of a similar long term chart of the gold ETF – “GLD”. 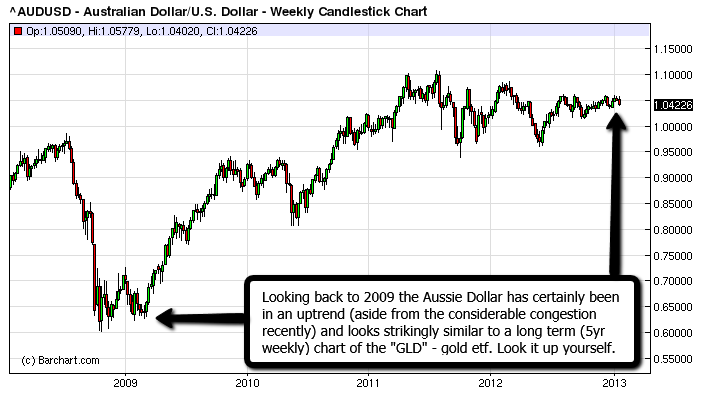 The Australian Dollar and its similarities to long term Gold chart.

Now taking a closer look at the current price in AUD/USD and keeping in mind our fundamentals (currently suggesting a possible “blow off top” in risk, with continued devaluation of USD) things look very much in line for some additional upswing in AUD/USD.

AUD/USD at near term support and clearly still trending upward.

This is another excellent example of how trades develop when one has the combination of “fundamental analysis” as well  “technical analysis” firing on all cylinders. The opportunities for considerable profit present themselves only when BOTH ARE ALIGNED.

I see an extremely low risk / high reward set up developing here – if indeed we do get an explosive move upward in risk, as retail investors flock into stocks here near the top. One could certainly keep a relatively tight stop here, as well “buy around the horn” as I’ve suggested earlier – spreading out your risk on entry. There is lots of room to run here – with even 1.08 on a relatively near term horizon.

Monday’s arent the best day for entry as there is alot of jockeying going on. I generally will look to observe price action and see where things end up mid day.