Often currency traders will look  at the Australian Dollar as the ultimate “risk related” currency. Not because the currency is in any way “chancy or risky” unto itself  (in fact the complete opposite) – but more so because of its direct correlation to the price of commodities, and its direct exposure to Asia – as Australia is the world’s second largest producer of gold, and a key trade partner of China .

Australia has substantial gold resources which are located in all States and the Northern Territory but predominantly in Western Australia, South Australia and New South Wales. Approximately two-thirds of all production comes from mines in Western Australia. Gold is one of Australia’s top 10 commodity exports and is worth about $14 billion per year.

When the Aussie Dollar moves, you can almost guarantee that “risk itself” is also on the move – as dollars pour out of safe havens (USD and JPY) and into those currencies/economies where a better return may be realized ( NZD and CAD as well).

With even better than expected employment numbers out tonight – and a relatively rock solid banking system – I see the Aussie above 1.05  – looking to move much higher – MUCH HIGHER. 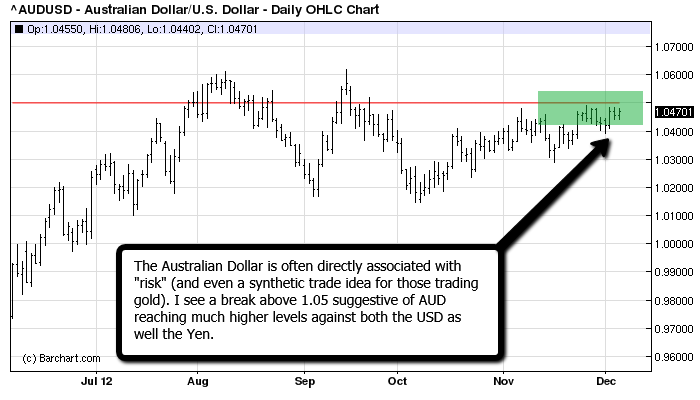 Aussie looking to move much higher

I am already well in profit on trades long the aussie dollar via AUD/USD as well AUD/JPY – and expect these pairs to continue upward as “risk on” soon hits the markets.